Memorial Day was not always Memorial Day. It started out as Decoration Day. A day dedicated to decorating the graves of the civil war dead.

“We do not know one promise these men made, one pledge they gave, one word they spoke; but we do know they summed up and perfected, by one supreme act, the highest virtues of men and citizens. For love of country they accepted death, and thus resolved all doubts, and made immortal their patriotism and their virtue.”

At least three of my Great-Grandfathers fought in the Civil War, George Wiley Whitehead, Columbus Augustus Stevens and George Bland Sublett. Two other Great Grandfathers were German and not in the US at the time. I still have to do some research on the other three, but since they lived in Virginia during the Civil War, I am thinking maybe they did as well. However, I will try to refrain from searching for that now, and focus on this blog. I had several others fight in both the Great World Wars.

My Grand Uncle, George Stevens Whitehead, was a Rhodes Scholar, and left the United States in 1916 for Balliol College, in Oxford England. He and many others left school in 1917 in order to join cause. In fact, when we were visiting our Georgia relatives last week, we read a series of letters written to Papa (Walter Everett) by George. One of them included a message from King George V, about the great duty they had to their country.

While thinking about the great sacrifices my ancestors made so that we could live in a free and democratic society, I am engulfed in patriotism. I am deeply humbled by their acts of courage. I honor them by paying tribute to these brave individuals. Today, we raised our flag and bowed our heads for those brave soldiers and their families that made the ultimate sacrifice. I write this blog and think about the individuals in my family that have given so freely of themselves so that I can be free.

Therefore, whether you raised a flag, run in a Memorial Day run, or wear poppy red, we will remember the valor of the dead.

Below are the men in my family that have served in the U.S. Armed Forces. 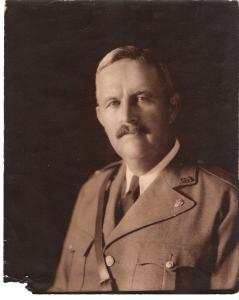 I just got back from visiting my Georgia Roots. The adventure was a whirlwind weekend in rural Georgia. My sister Kathy, Cousin Susan both joined me for the weekend voyage. My Aunt Leah met us there and spent the day with us too. Our hostess and tour guides were our second cousin Sara and Charlie. We are forever grateful to Sara, Charlie and Miss Kitty for making themselves available to us.

Kathy, Susan and I set out Friday morning for Carlton. Everyone was a bit apprehensive, because we didn’t know exactly what was in store for the weekend. We were meeting relatives that we had not seen or really spoken to for 35 years. All of this was orchestrated because I wanted to investigate the homeplace and the area in which my ancestors had lived.

My sister had been on a previous genealogy trip with me and knew somewhat what she was getting involved in. But Susan, well, she did not really know the length of time that I had been researching or the depth that I was passionate about it. Both Susan and Kathy served me well. They were my photo journalists for this project. Over the course of the next few blogs you will see some of their handy work.

We arrived in Carlton just before noon. After getting acquainted, we headed off to our only preset appointment, lunch with Miss Kitty. Eleanor “Kitty” Mitchell Stevens, she is the wife of my 1st cousin 2x removed, Joseph Augustus Stevens, Jr.   She lives in the homeplace of Columbus “Gus” Augustus Stevens, my 2nd Great Grandfather. I am not exactly sure when the home was built but it is a grand old home.

Kitty prepared a spread. We visited while we ate. We visited after we ate. We then got up and looked around the place. Kitty had Gus Stevens Bible out for us to see all of the dates recorded. We spent a lot of time in Gus Steven’s old bedroom. I love the old homes that had a hearth in each of the bedrooms. This room had been converted to a children’s play room when Charlie and Sara were growing up. The parents would sit and visit in the front parlor and the children could play nearby. 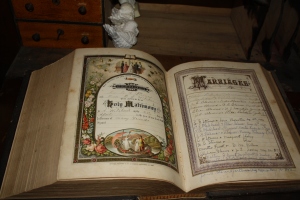 After bidding Miss Kitty adieu, we set out for the Homeplace. I have written about the home place here (https://exploringbackwards.wordpress.com/2015/01/27/whitehead-homeplace/)

This was the place where George Wiley and Cena Ann Mathews resided after the Civil War. The place today is still family owned, but it is being leased to a hunting group that has made it a great hunting lodge. From the decorations on the wall it seems that Turkey is their game of choice. 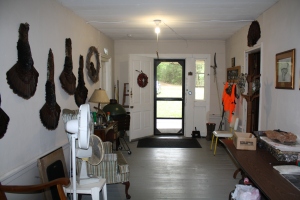 While there, Charlie showed me the proper way to handle a Honeysuckle Vine. 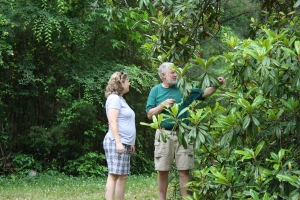 Charlie giving Krista a lesson on the Honeysuckle Vine

After leaving the Homeplace, we went to the Steven’s Family Cemetery. This is on Steven’s Homeplace property. We then went to see the Mathew’s Family Cemetery where Cena Ann Mathews and George Wiley Whitehead are buried. Lastly we went to see the Whitehead/O’Kelly gravesite. This is now on property owned by another individual, but Charlie had made arrangements to let them know we were coming. This cemetery has a chain-link fence that the Daughters of the Revolution had placed along with a marker indicating that Joel Whitehead’s father-in-law had fought in the American Revolution. The DAR has since changed their opinion on this matter. But that will be another story at another time. I am getting off track!

After everyone was worn out, we returned to the Carlton home to rest for a while. Well, other people rested, I was still in fifth gear, Charlie, Leah and I sat down and we went over some of the items I had brought. I was pleased that I could fill in some gaps for Leah on her family tree.

We then set out for dinner at the Red Minnow in Elberton. Cousin Sara told us that Papa loved Elberton. I am not sure why. I will have to ask. A piece of trivia for everyone, Elberton is known to be the granite capital of the world. [You can read more about granite here: http://www.egaonline.com/]

The Red Minnow is an all you can eat buffet of everything precious to the south. The kitchen must have a hundred deep fryers to cook everything. It was not Swamp Guinea (a much-remembered restaurant from our previous visit in 1980). However, we were hungry and the food was good.