George Stevens Whitehead is my Grand Uncle.  As you may recall from previous posts, he was a Rhodes Scholar. Prior to attending Oxford, he had the highest Grade Point Average while attending the University of Georgia for over 40 years. George was 20 years old in 1916 when he embarked from New York to England to attend school at the Balliol College at Oxford University. He was only able to get a years’ worth of study in before he the United States entered the war.

George returned to the United States in 1917 to serve in World War I.  In one of his letters to his father, he writes from Camp Dix stating he got his orders and that he had qualified as a Division Instructor in Machine Gunnery.  He served in both the 335 and 313 Machine Gun Battalion.  We have sailing records of him returning to the United States in his official role as Second Lieutenant on 13, July 1919.

After the War was over George went back to Oxford to resume his Rhodes scholarship. In a letter to his father, dated April 28, 1919, George writes, that he had asked to remain in the army while he continued his studies.  George graduated in 1920 with both an A.B. and a M.A degree from Oxford University.  We know he stayed overseas for a little while.

While we mark 11 November 2018 as the end of the WWI, that does not mean things go back to normal so quickly.  In fact, I have just learned that my grand-uncle, George Stevens Whitehead was working in the peace capacity for the YMCA in the period after the war.  He was listed as a Secretary for the YMCA.  According to one of the documents, I found George received a pass to take care packages to Russian prisoners in Germany.  It is likely he spent the next year working for the YMCA.

While reading one of Chloe’s writings, I found out that George was able to stay abroad after completing his studies because the Governor (assumed Georgia Governor) financed a year or two.  “During the summer he got a job taking prisoners of war back to Russia (Whitehead, personal papers).  Below is a travel pass issued by the German Government on behalf of George Stevens Whitehead.

George in front of Tent

My father’s friend Wolfgang provided us a rough translation.

This document needs to be returned after it has been used.

The person in the attached picture is the American citizen

Secretary of the international committee of the (German) YMCA.

He should not charged with travel expenses.

He travels under the protection of the German Government.

All Government agencies should allow him to travel and act as he desires and should offer him help if he needs it. 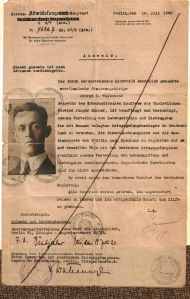 I did a little research on this.  It turns out that the YMCA assisted prisoners of war with food and facilities (Hanna, 2015).  To know that my grand-uncle was a part of this great humanitarian effort gives me joy.

Until later, I will keep exploring backwards.

If you are new to my blog, you can see the other times that I have written about this ancestor: