I have had hard time getting back to this blog.  Somethings just seem to always get in the way.  I bought a computer a couple years ago, and well, I think it was a lemon.  Our internet was slow, and I genuinely lack the desire to go into my office and deal with both of those things.  My lovely spouse recognized this and ended up buying me a faster better computer.  So here I am.  A couple of updates from me first.

So, this is not a normal blog post but in order to get it to meet the loose requirements of exploring backwards I thought I would share how distant cousins can still have an impact in our genealogy research.

Heinrich and I were trying to find out how we were related and at what point.  Well it turns out that Heinrich is my 2nd great-nephew of wife of 3rd great-uncle.  Is your mind blown, mine was?  So technically we are not blood relatives.  But, his German upbringing has brought insight into my German sides history.  We connect at Daniel Kersten (1792-1865), who is my third time great grandfather.  Daniel and his wife, Margaretha Gierten had five children.  Mathias Kersten (1843-1905) is my 2nd great-grandfather.

Wilhelm Kersten (1858-1925) is Heinrich’s connection.  Wilhelm was 15 years younger than his older brother Mathias.  I have included the connection so you can see for yourselves.

Wilhelm married Gertrud Backes after arriving in Chicago, Illinois.  According to Cousin Heinrich, there is a bit of drama into this relationship.  Heinrich stated that Gertrud’s father, Mathias Backes was not happy with the courtship of Gertrud and Wilhelm.  I am going to quote Heinrich because it is a very interesting story.

Before I now come to talk about the Kersten family, I have to introduce the father of Gertrud Backes, Matthias Backes (born 14.03.1828 in Eimerscheid, died 17.03.1911 in Manderfeld).

The word “Backes” is in the dialect of the German language the name for Backhaus. A baking house is a smaller building for all the villagers so that the families in the village could bake their bread and other things.

The village Oberlascheid lies about 8 kilometers south of Manderfeld in the German federal state Rhineland-Palatinate, in the district Bitburg-Prüm and belongs today to the association municipality Prüm.

Matthias Backes is called the “Alte Backes” (awesome) among his descendants because he turned 85, made the Backes family in Manderfeld the leading family and was very innovative for his farm in Manderfeld and for the village of Manderfeld as a whole.

If you drive through Manderfeld and Oberlascheid today, you can clearly see the difference in prosperity.

Gertrud Backes was baptized on 02.0.1867 in the parish church Sankt Lambertus Roman Catholic and her godparents were Nikolaus Theissen from Manderfeld and Gertrud Köllers from Lascheid.

The 3rd child of the married couple Matthias and Anna Maria Backes also had the first name Gertrud, she was born on 24.08.1865 in Manderfeld and died on 20.05.1866 in Manderfeld.

5th and 6th children of the married couple Matthias and Anna Maria Backes were the twins Anton and Margaretha. They were born on 04.12.1870 in Manderfeld. Anton died already on 02.02.1871 in Manderfeld.

A substantial reason that both have moved to Chicago was that Matthias Backes as father of Gertrud Backes did not agree with this desired marriage, because the Kersten family or Wilhelm Kersten was clearly less wealthy than he himself.

This marriage did not achieve his goal of further increasing the family’s wealth through wealthy spouses.

According to the stories in our family, Gertrud Backes had her compulsory inheritance paid out and went to Chicago with Wilhelm Kersten.

[My newfound cousin was nice enough to translate a will I discovered.  Unfortunately, I do not know the source of its existence.  I will have to do more research there.  I will include that in a future post because it combines a couple of things that need exploring.]

One additional speculation as to why Gertrude’s father did not agree to this marriage could have been the nine-year age difference between the two.  According to the index of their marriage that I found, Wilhelm was listed as 27 and Gertrude was just 18 years old. 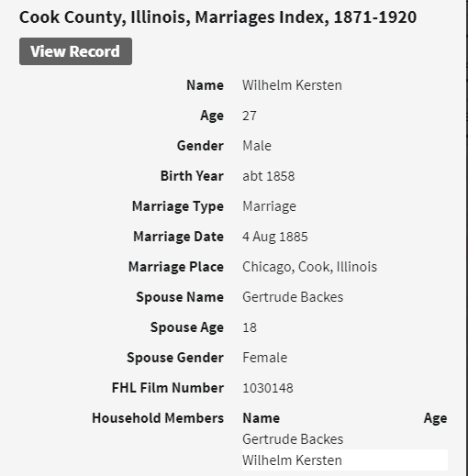 It also could have been that they might have been pregnant before the nuptials.  Their first child Mathias Nicolas Kersten was born 16 Mar 1886, approximately 7 months after they got married.  Unfortunately for the newlyweds, Mathias died just 6 weeks later.

Okay, that is all for now.  Thanks for going on this journey backwards with me.  I know there has been some dry spells but I hope to get back at it.  Thanks Cheryl for my fancy laptop!  I love it.

In the meantime, if you are a relative and have some photos or information, please reach out to me so I can add those documents to our family story.

Until later, I will be exploring backwards.